Why go downtown when you can enjoy your daily dose of online gambling uptown? Introducing Total Affiliate Group’s made-for-home virtual casino brand, Uptown Aces. This one-of-a-kind virtual gambling arena is designed to be enjoyed at home. The experience it provides is tailor-made for punters who want to enjoy an authentic gambling experience within the confines of their homes. This is evident in how relaxing the overall vibe and design of the site is. The subdued green, purple, and white colors of the site give it an enticing feel that’s just enough to attract new players while also satisfying long-term and existing members. What makes the casino stand out is its simplicity that is pleasing to the eyes. It also helps that the site’s design is intuitive and is very easy to navigate. 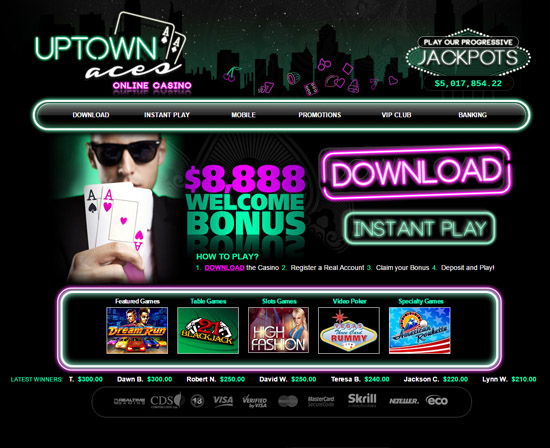 Uptown Aces has been around since 2014

Uptown Aces has been around since 2014. It is not a new site, but it is also certainly not that old. Its design does not reflect that very modern look that casinos launched after 2018 are known for. However, its nostalgic theme is what gives it an edge over other brands. Uptown Aces was also originally part of the Deckmedia Group. It was under the care of Deckmedia ever since it got its license in Curacao from Hastings International B.V. and until then it was able to build a solid reputation in the industry. However, it was also part of the list of casinos transferred to the Total Affiliates Group in 2020. Despite its new beginning, Uptown Aces did not change anything on its end and only focused more on enhancing the overall experience it provides its clientele by updating its promotions and expanding its banking options.

Uptown Aces is less than a decade old, but it has already made a mark in the industry for its unrivaled quality of service. This is not surprising since the site is powered by the very reliable and well-established software provider called Realtime Gaming. Unlike other casinos that go to extreme lengths just to attract would-be players from many different places across the globe, Uptown Aces has decided to focus more on four big markets, namely: the United States, Canada, Australia, and New Zealand. To better cater to its clients’ needs, the casino has also formed a team of very knowledgeable and friendly customer service representatives who are always on standby for inquiries and concerns. The team can be reached via email and through the live chat feature of the site.

Unlike its sibling sites, Uptown Aces is powered by RTG. This translates to seemingly endless hours of high quality gaming. That’s because RTG is a powerhouse in the iGaming space with its huge trove of traditional and modern online casino games. The site’s gaming suite is divided into six categories: new games, table games, video poker, speciality, progressives, and slot games. Among the six, slot games is the most packed category since RTG is known for releasing new slot titles every so often. When visiting the site, be sure to try some of its very famous slot offerings that include Basketbull, Achilles, The Big Bopper, Super 6, and Bigshot.

When it comes to promotions, it’s easy to see that Uptown Aces is always generous to its players. In fact, the moment new members sign up their membership forms, they are given access to a massive welcome bonus that is worth up to $8,888 and comes with 350 free spins. The casino also has a special offer for table games and video poker fans. The $1,500 free casino games bonus is exclusively made for them. It can be availed twice, and each time they will be getting $750. Uptown Aces is also very particular with the complimentary points they give players who regularly wager on the casino games. There is also the 100% low playthrough deposit bonus that can be availed after making their first deposit.

Uptown Aces takes banking very seriously. The site is proud to say that with its advanced technology and whatnot , all virtual gambling transactions with its cashier are guaranteed safe, secure, and reliable. To make instant deposits, players can choose from Visa, Mastercard, American Express, Skrill (Moneybookers), Neteller, EcoPayz, and Direct Money. Bitcoin and Litecoin are also supported by the site, but unlike the others, these two take up to 1 hour to completely process a single deposit transaction. For withdrawals, the same list of money-transfer modes are presented on the casino’s banking page, and only Skrill, Neteller, and Litecoin are not part of it.