Spinfinity Casino is the fourth product to come out of the Legend Affiliates Group. It was officially launched in 2020 with the goal of once again capturing the US market. Though it’s still too early to tell, the virtual gambling arena is already building a good track record with its impeccable services. Among the Legend brands of online casinos, Spinfinity’s website has the most minimalist and clean design thanks to its white and blue theme. This casino unlocks the portal to a new universe of gaming that seems to be very familiar on the whole. The familiarity stems from the fact that like its sibling sites, Spinfinity is also powered by the very reliable Realtime Gaming software provider. 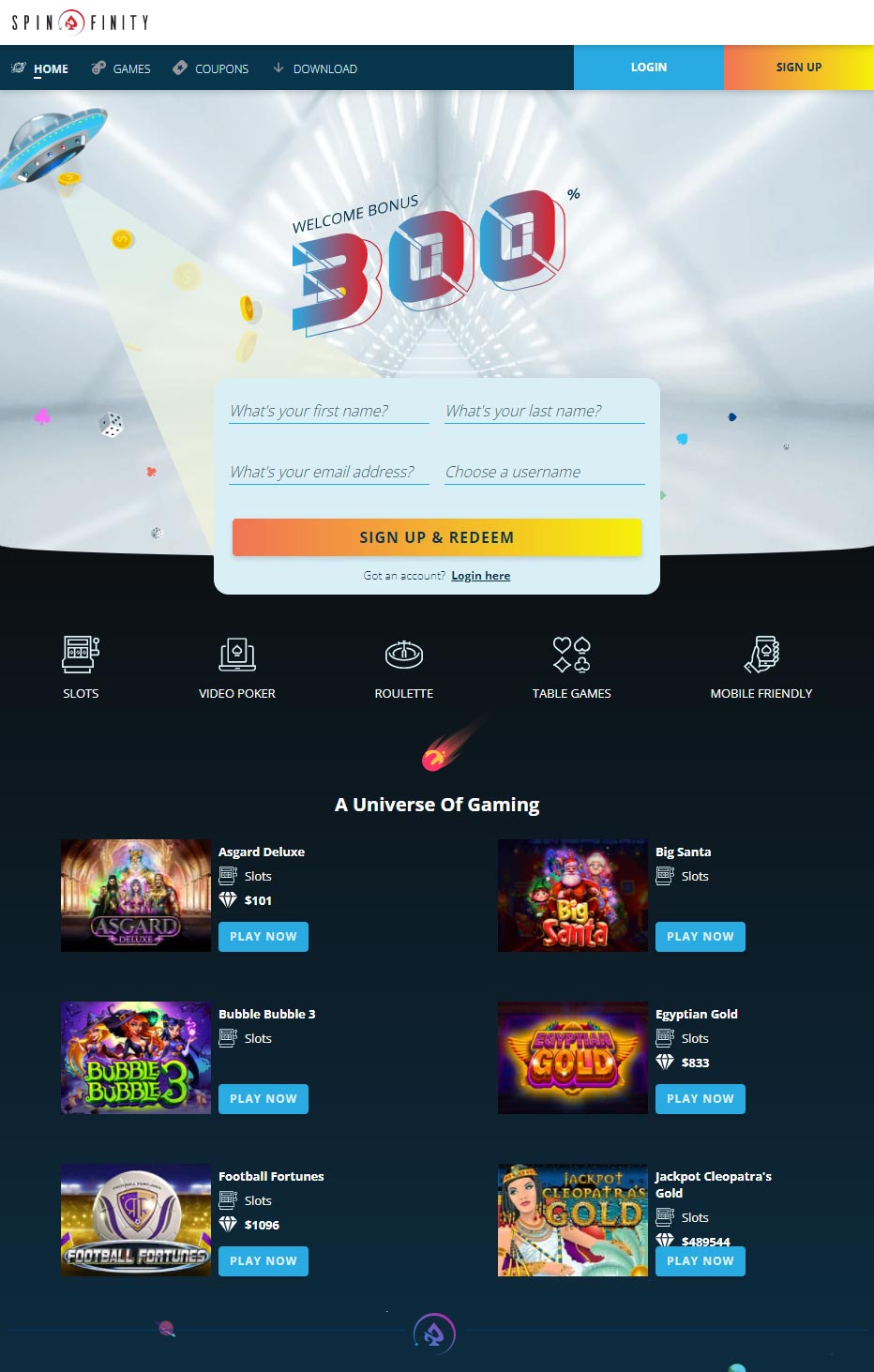 Opening in February 2020 gave it an advantage since many punters were forced to stay at home not long after that. The quarantine paved the way for more players to take an interest in what it has to offer as a new online casino. And the brand did not fail to deliver. With its professional team of casino veterans and very professional customer support representatives, Spinfinity was able to tickle the fancy of many clients. In fact, it has now become one of the sought-after brands in the North American market.

License issued by the Government of Curacao, USA Players Accepted

Though it has not been that long since Spinfinity entered the iGaming scene, it has already established a strong presence in the industry with its unique charm that is rooted in high quality customer service. Like its sister sites, Spinfinity is owned and operated by Entertainment Software Group N.V. It also operates under the Master License issued by the Government of Curacao, while its online banking is managed by Pippen Investments Ltd. Spinfinity accepts players from many countries, but its main target markets are the United States and Canada. One thing that gives the brand credibility is its Responsible Gaming campaign that seeks to provide players full support in their online gambling endeavors without compromising their financial limits. The platform extends help to those who may be struggling with gambling problems, so as to prevent serious repercussions later on.

Spinfinity’s collection of games makes use of random number generators to ensure that each and every game is fair and accurate. This is implemented in part with RTG, which is known for having a vast array of high quality and trustworthy casino games. Speaking of games, Spinfinity has hundreds of titles to offer. Most of its gaming suite is composed of slots since this type of casino game is the most in demand in the iGaming industry. Some of the fan-favorite slot titles available on the site are Ancient Gods, 5 Wishes, Lucha Libre, Scuba Fishing, Witch’s Brew, and Voodoo Magic. The casino is also home to a number of specialty, progressive, video poker, and table games that came from RTG as well.

The Legend Group of casinos is known for offering some of the most generous promotions in the market. Spinfinity embodies this well with its slew of bonuses, rewards, and perks for its loyal customers. New members are gifted with a 300% up to $3,000 slots bonus for their first deposit on the site. This promo is applicable to the first five deposits, so the total bonus amounts to $9,000. Spinfinity has a separate offer for Bitcoin users, as they are gifted with a 500% sign-up package when they make their first deposits. Becoming a member will automatically give players access to a multitude of perks that are up for grabs regularly. The casino has daily, weekly, and monthly slots bonuses for punters who regularly play on the platform.

Spinfnity prides itself on having a very safe and secure online banking system. Aside from ensuring that its services are accessible to the masses, the casino also sees to it that everyone is treated like VIPs whenever they make financial transactions on its platform. Spinfinity indicated on its banking page that players can rest assured that all of their transactions are processed with the highest level of security. For deposits that are processed instantly, players can choose from Visa, Mastercard, Diners Club, American Express, Discover, and Interac E-Transfer. All of them do not require transaction fees. For cryptocurrency users, Bitcoin is also supported for instant deposits without fees. On the other hand, though Altcoins (Litecoin, Bitcoin Cash, and Ethereum) do not have fees, they take longer to process than Bitcoin. Transactions using the three cryptocurrencies take about 5 minutes to complete. For withdrawals, all players only have three options to choose from: check, bank wire, and Bitcoin.