Red Stag Casino is relatively new in the industry, for it hasn’t been more than a decade since the brand launched. Despite this, the casino has already captivated countless clients from many places around the world. This is all thanks to the quality of service it provides. Red Stag was established under the Deckmedia Group at launch. The group is known for having online gambling veterans with thorough knowledge on how the industry works. In 2020, the casino was moved to the care of Total Affiliates, a budding group in the iGaming scene that is also composed of industry veterans. This makes Red Stag a sibling of the other well-established brands, Slots Capital, Desert Nights, and Uptown Aces. 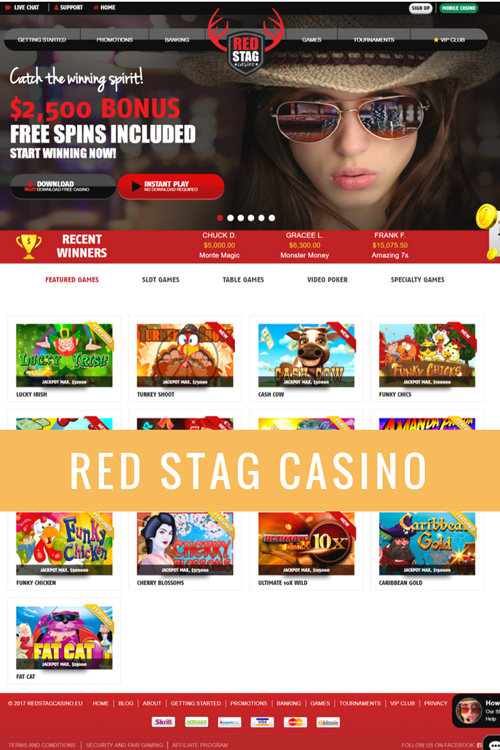 Red Stag was formally launched in 2015

Red Stag was formally launched in 2015. It was introduced at a time when the industry started to transition to its more modern and technologically-advanced era where almost every brand is equipped with mobile and cryptocurrency support. As such, the brand comes with all the trappings of the modern-day casino. It has a secure and fair gambling environment. Its games are well designed and powered by random number generators. Its banking system also does not discriminate against crypto enthusiasts, since it supports Bitcoin and Litecoin. Just like its sibling sites, Red Stag operates legitimately though a license it obtained from Curacao.

As a modern casino, Red Stag Casino has chosen to focus on four major markets: the United States, New Zealand, Australia, and Europe. This is the reason why most of its promotions are targeted at the people residing in these regions. It dubs itself as a people’s choice casino as it provides a gaming environment that honors the hard working gritty individuals who are eager to enjoy some quality online gambling action during their free time. The casino runs on the award-winning software by WGS Technology, and it has massive jackpots waiting to be grabbed by deserving punters. The various casino games in its suite are readily accessible via PC or mobile, so players have the option to enjoy them while on the go. For all inquiries, concerns, and whatnot, Red Stag has friendly operators on standby 24 hours a day, seven days a week. Customer support can be reached via email and the live chat feature of the site.

When you enter Red Stag Casino, you are entering a world where you feel like a boss. Massive jackpots, hot tables, and state-of-the-art casino graphics are within your reach because Red Stag was built to deliver. It is worth noting that every gaming title found on the platform is from the famous WGS Technology software provider, so you can rest assured that what you are getting is the top-of-the-line gaming experience each time you log in to your account. The site’s gaming suite is divided into different categories, including slots, video slots, video poker, blackjack, table games, and progressives. But undeniably, the slots category is that one that is jam-packed with all the goodies as it hosts the most number of games available on the platform. Some of the highly recommended games found at Red Stag Casino are Haunted Reels, Double Gold, Crazy Cherry, Wheel of Chance, Vampire Vixen, and Tailgate Blitz.

The fun never seems to stop when you are at Red Stag Casino. That’s because the site is home to some of the most generous promotions in the industry. The moment you sign up for a membership, you are rewarded with a $2,500 welcome bonus and up to 500 free spins. Once you have become a member of the site, you are given access to an array of weekly, monthly, and other regular offers. For mobile users, Red Stag has an exclusive bonus that is redeemable every day of the week. Bitcoin and other crypto users can also take advantage of the exclusive rewards and special offers. Like its sibling sites, Red Stag also gives active players comp points that they can later on exchange for real money.

If you are looking for a casino that has a hassle-free banking system in place, then you have come to the right spot. Red Stag has a very efficient online banking system that makes deposits and withdrawals a breeze. For deposits, members can choose from the following money-transfer options: Mastercard, Visa, Bitcoin, Neosurf, Bitcoin Cash, Skrill, Neteller, Sofort, Litecoin, and Paysafecard. For withdrawals, the options to choose from are Bitcoin, Bitcoin Cash, Skrill, Neteller, Litecoin, Wire Transfer, and Check. While deposits are almost always instant, withdrawals take up to 72 business hours to complete.