If you are looking for some real online gambling action, then you might want to consider Desert Nights Casino. This product of the Total Affiliates Group is just like an oasis in a desert of bland and run-of-the-mill virtual gambling platforms. As an oasis, it offers refuge to those who are thirsty for an authentic casino experience. Though not a pioneer in the iGaming industry, Desert Nights is still able to stand out because of its high quality service that is matched with its stellar selection of games from the one and only Rival software provider. The brand also has a downloaded casino suite that players can install on their devices for quick access whenever and wherever. 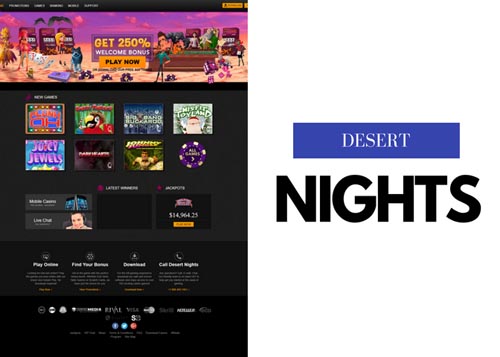 Desert Nights was established in 2010

Though Desert Nights was established in 2010, the people behind it were already active in the online gambling space since 2007. The brand was previously under Deckmedia, which is considered as one of the most respected virtual gambling experts in the industry. However, amid the early days of the pandemic, the brand was transferred to the care of Total Affiliates. The move was also a good thing since Total Affiliates is responsible for many other credible online casinos, such as Slots Capital, Uptown Aces, and Red Stag. Just like its sibling sites, Desert Nights is licensed in Curacao. It also upholds the highest standards of fair gaming, and it implements a strict policy against fraud. The casino’s 128-bit, SSL data encryption technology is also regarded as best-in-class when it comes to ensuring the security of the accounts and data of its clients.

As mentioned, Desert Nights Casino is operating with a license granted by the Government of Curacao. As a legit online gambling platform, the brand offers superior customer service on top of its many other entertainment and gambling features. Its Rival-powered gaming suite is accessible to many players around the world. However, it is widely known that Desert Nights primarily targets the United States, Australia, and New Zealand markets. This is perhaps the reason why its customer care services are mostly focused on catering to the needs of punters based in these places. For inquiries and concerns, the casino’s customer care team is available 24/7. However, they can only be reached via email and live chat for now. The site is still in the process of adding phone support.

As a leading B2B developer and supplier of casino games and software, Rival has long been given the seal of approval by the online gambling community. And this seal was extended to Desert Nights the moment the brand was launched more than a decade ago. The online casino features the best and most talked-about titles from Rival. Its gaming suite is divided into slots, i-slots, table games, jackpots, video poker, and specialty games. Among the categories, i-slots demands the most attention since it is a different category for virtual slots that are designed to be interactive. For now, Desert Nights only hosts one i-slot from Rival, and it is Panda Party. Meanwhile, the most highly recommended titles available at the casino are Robin in the Woods, Jane’s Farm, Jackpot Jam, Bright Star, Dead Beats, and Diamond Dazzle, among others.

Desert Nights Casino has an enticing Promotions page where all of the bonuses, rewards, and perks that are up for grabs are presented to visitors and existing members alike. The most striking is the welcome package that is divided into two: a $10 free no-deposit bonus and a 250% welcome bonus that can go as high as $2,550. The welcome package is exclusively for new members only. But longtime members are not neglected as the casino also has daily and weekly bonuses for them. One of them is the 100% weekend bonus that comes with a free $50. Finally, the casino has a reward system in place that grants players with exclusive perks. For instance, the comp points, scores that players earn for actively playing on the platform, can be exchanged for some real money.

Desert Nights is one of those who came prepared from day one. The brand knows how important online banking is to its clients, so it has partnered with some of the most trustworthy and credible payment methods in the market. For deposits, clients are free to choose from Visa, Mastercard, Skrill, EcoPayz, SiD Instant EFT, Bitcoin, Bitcoin Cash, and Litecoin. For withdrawal of winnings, clients can choose from Skrill, EcoPayz, Neteller, check, and bank wire transfer. All of the payment methods are subject to certain terms and requirements, so it is best for new members to ask for assistance from the site’s cashier during their first deposit or withdrawal.