Step into a world where sailing the seas to the unknown could lead you to a treasure trove of never-ending wealth. Introducing Captain Jack Casino—the ultimate destination for online punters who want to embark on a journey of a lifetime. When you enter this online gambling platform, you are right away greeted by the treasure chest from none other than Captain Jack himself. The crate comes with an exciting offer for all those who want to join Captain Jack in his adventures. 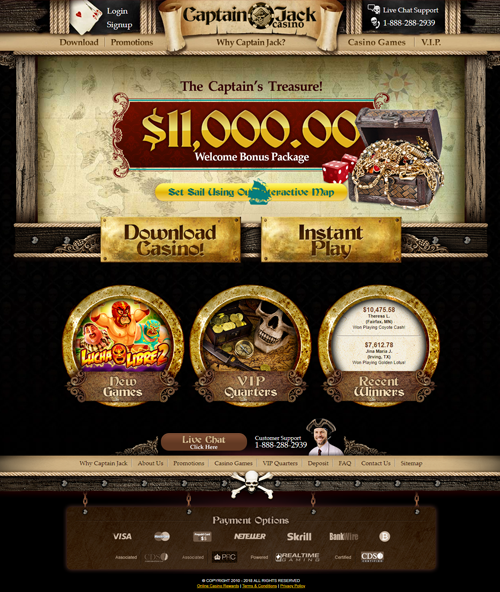 Founded in 2009 Captain Jack Runs on Realtime Gaming Software, and is licensed in Costa Rica

Captain Jack was founded in 2009. It runs on Realtime Gaming’s software and is licensed in Costa Rica. Though not among the pioneers in the industry, the site has managed to build a name for itself through its commendable customer service and its collection of high quality casino games. It has a transparent privacy policy that is focused on offering a secure environment to its clients. Captain Jack operates with integrity. That’s why its casino uses a Random Number Generator, so that each game is guaranteed fair and honest. Banking transactions with the casino are also a breeze as it has partnered with some of the most in-demand money transfer methods in the industry.

The online casino is open for many players across the globe. However, it also has its target markets. Captain Jack currently accepts players from the United States, United Kingdom, New Zealand, Australia, Europe and Canada. To cater to players from these major markets well, Captain Jack offers 24/7 live chat support. There’s also phone support for those who wish to speak to one of the company’s agents who are on standby. And for those who want a more in-depth experience, the casino also accepts inquiries and assistance via email. But unlike the other two, email support could take hours to respond.

As an RTG-powered online gambling platform, Captain Jack is home to many of the casino provider’s staple titles. Fans can choose from a vast selection of slot games, including but not limited to Lucky Catch, Legend of Helios, Eternal Love, Football Fortunes, as well as the Cash Bandits and Bubble Bubble series, among others. Captain Jack also has table games, video poker and specialty games, but they are very few compared to the slot titles. Still, it’s worth noting that RTG’s famous titles are found at Captain Jack all year round. For instance, it also offers Banana Jones and Fish Catch—two of the most sought after titles from the software provider.

New members are gifted with the $11,000 Welcome Bonus, which is scattered 10 times. This means players get up to $1,000 free for their first nine deposits and up to $2,000 for their 10th deposit. The last deposit bonus is also made extra special since players won’t have to make a deposit to claim it. Captain Jack has two other special promos: 180% No Rules Slot Bonus and 250% All Games Bonus. Both offers do not have withdrawal limits. There is also the Cash Back offer that is exclusive to certain games, namely: Craps, Roulette, Pai Gow Poker, Baccarat, Blackjack, Video Poker and Sic Bo.

Banking has never felt more hassle-free at Captain Jack. For deposits, members can opt for the standard and most universal method using Visa or Mastercard credit cards. Neteller is also supported, for those who prefer this e-wallet option. As one of the more modern casino brands out there, Captain Jack has also jumped on the bandwagon of accepting the fastest growing cryptocurrency, which is Bitcoin. For withdrawals, the casino currently supports three options: Bank Wire, Bank Checks and Bitcoin.