Cut in the same cloth as its sibling sites Vegas Crest, Cyber Bingo, and BingoFest, BingoSpirit offers a somewhat similar yet overall different virtual gambling experience. For over a decade, the casino has been a hot destination for punters who want to enjoy a first class online bingo experience. It also offers an exciting place to play other casino games, since the brand is powered by Vista Gaming’s proprietary software. Ever since its launch in 2004, BingoFest has awarded some of the biggest single bingo jackpots in the iGaming industry, and it continues to do so in recent years. As such, it remains to be one of the biggest bingo communities online. 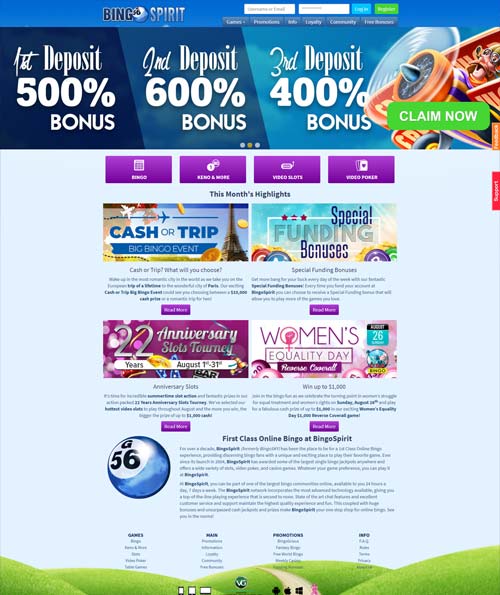 Playing at BingoSpirit is like gambling in a real casino in spirit. Though you are not there physically, your person is transported into a world where you get to enjoy the highest quality gambling experience. With its advanced technologies and very efficient system in place, BingoSpirit is really capable of delivering a top-of-the-line playing experience. Vista Gaming’s gaming software is the secret to the brand’s success. The software provider has been in the industry since the early 90s, so it has established a remarkable reputation that is backed by the quality of its games. It has even won numerous prestigious awards for its top-rated bingo and other casino games. And you will be given access to these games, when you play at BingoSpirit Casino.

BingoSpirit was officially launched in 2004

BingoSpirit was officially launched in 2004. It’s not one of the pioneering brands in the industry, but it can easily hold a candle to the longest-running bingo-centric sites out there, including its sibling site Cyber Bingo, which has been around since 1996. What makes BingoSpirit a great destination for punters is aside from having top-quality gaming software, it also has excellent customer service as well as a very generous promotions list. Just like its siblings, BingoSpirit is operated by Palau Holdings NV and it is licensed by Curacao eGaming, which is authorized and regulated by the Government of Curacao. BingoSpirit accepts players from various places worldwide, but it has set its sights on five main markets from the get-go. They are the United States, Europe, Australia, Canada, and New Zealand.

As one of the web’s largest online bingo halls with the most up-to-date software technology, BingoSpirit does not require players to download its software to enjoy its games. All of its games are accessible via any browser and any device, be it a PC, tablet, or smartphone. The site’s gaming suite is divided into five categories: bingo, keno & more, chain reactors, video slots, and video poker. This just goes to show that even if the platform is focused on bingo, it also has other tricks under its sleeves. For bingo enthusiasts, the casino hosts 7 regular tournaments. For general casino players, there are hundreds of titles for you to choose from when you enter BingoSpirit. The slot machines selection alone is enough to keep you entertained for months. Some of the crowd-favorite titles available on the platform are Genies Fortune, Flea Market, Bust A Vault, Chicken Little, Mr. Vegas, Land of Gold, and Medieval Knights.

Going all out with promos

BingoSpirit goes all out with its promos. New members are greeted with a warm welcome and a free $20 no deposit bonus and 30 free spins. The casino also has a generous signup package that gives players a total of 1,500% deposit bonus on their first three deposits. BingoSpirit has weekly, monthly, and seasonal rewards and perks as well. For instance, it has a Christmas bingo room offer that gives players a chance to win $625 each day until the 25th of December. The casino’s Slot Circus Tournament is a regular event that gives everyone an equal chance to bring home $300 cash on Friday and Saturday. And should you go on a losing streak, BingoSpirit is willing to help you get back up with its cashback promo that gives players 50% of their losses.

BingoSpirit Accepts Deposit Via Credit Cards and Other Options

Banking is one of BingoSpirit’s top priorities. That is why it has teamed up with the most trusted money transfer services in the industry. For deposits, players can choose from a slew of options, including Visa, Mastercard, Neteller, iPoint, Gift Card, Ukash, Skrill (Moneybookers), MyVoucher, and bank transfer. Withdrawal transactions can also be done through the same methods, but BingoSpirit has a very strict verification process. Players should disclose their real identities to the site in order for their withdrawal transaction to be processed. Verification is also required for every transaction to ensure that no issues would arise later on.